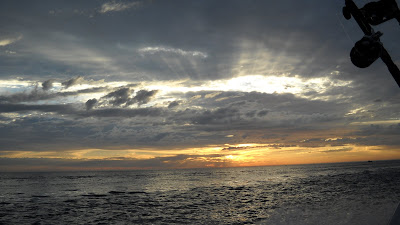 June 5th. Dawn breaks, muggy with mid level, hazy red altocumulus clouds - predicting heavy weather for later ..... like we care! It's time for a break from dealing with all things relating to telescoping and articulating cranes. On the other hand, as one of our compatriots points out, a reel is just a winch and a rod is, well, just a crane...... 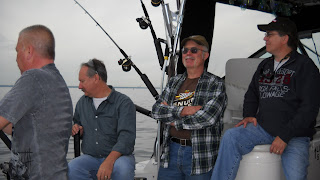 Right now, we have bigger things on our mind, the boat, the trophy and the salmon. Coho and Chinook ("Kings" if you prefer) are hanging on the temp and current breaks, waiting for the always victimized and apparently never the wiser, alewife .

Captain Jerry and his wife Lisa check our licenses, brief us on the necessary stuff, cast off lines, crank the engines on the Wellcraft, and out we go. 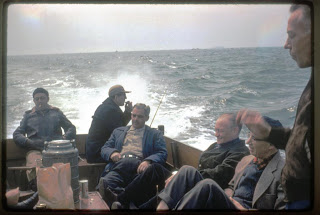 A couple of miles into the top secrets spots (per GPS) and Capt. Jerry starts setting out our downriggers, yellow birds, walleye boards and setback racks - 14 rods out in all. There are 6 of us fishing. Fair is fair - man vs fish. 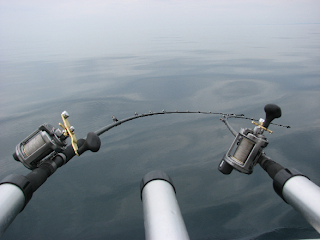 The Captain and crew work hard to keep us on the fish, but there will be no limiting out today. Long minutes of watching rod tips and going for a boat ride is interspersed with - mad flurries of frantic reeling - and responding to orders barked at us from the captain.

Excitement among the crew builds - 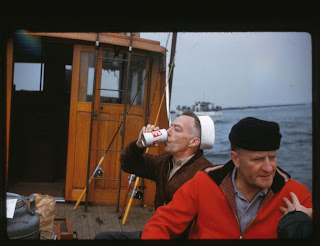 - as Mr. Lucky ties into a bruiser that tries to strip his reel. After almost 15 minutes of back and forth battle, thirteen pounds of silver and grey King salmon in the cooler is the big fish that leads the day in the quest for the Runnion Traveling Trophy - and the bragging rights that go with it. 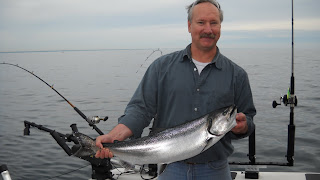 Twenty minutes later, the fish of the day falls to a new champion. A sixteen pound king sneaks into the boat, surprising everyone with it's size. 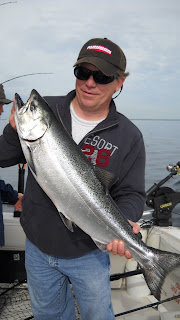 (It's lack of spirited fight no doubt credited to the fear it felt when it knew it was hooked by the Major.) 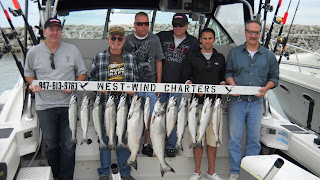 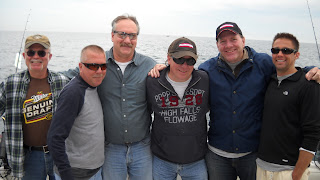 And along with a great recipe for salmon marinated in barbecue sauce, it was a great evening as well! 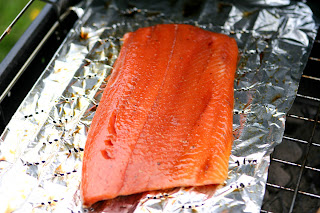 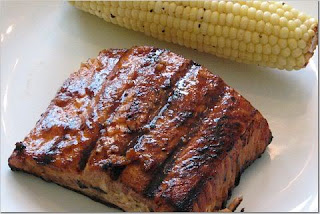 Posted by Runnion Equipment Company at 10:22 AM No comments: