Posted by Runnion Equipment Company at 9:11 AM No comments:

Taken in trade, just run through our shop - serviced, painted, lubed, fueled and ready to work.

Unit has an OSHA inspection sticker current through February 2012. 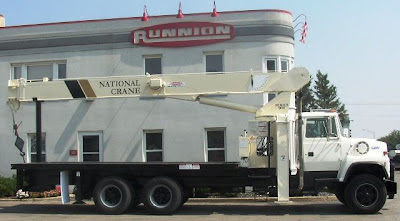 UNIT 3501U
Posted by Runnion Equipment Company at 2:26 PM No comments:

Runnion Equipment Company has been selling cranes since 1975.
We think that is a long time.

﻿ Earle Runnion sold this National 5T to a customer way back in 1963 - only the second crane manufactured by National Crane back in the Waverly, Nebraska days.


This crane was traded-in in 1999, fully operational and is now owned by Runnion Equipment Company

Stop by and see it if you are in our area.

Let’s say you need to regularly lift 6 tons and - after finding the crane you have been looking for - you pull out of the Runnion parking lot with your new Palfinger knuckleboom – happy with the state of the art in cranes …..wondering how you ever got along without it. 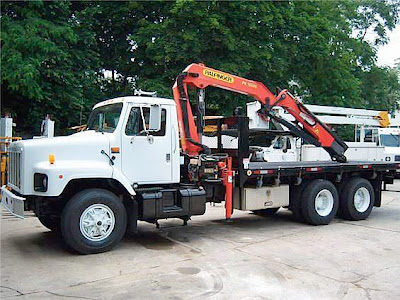 In fact, since you just got back from a trip to visit the family in Athens, you think, "Boy, I could have shown those guys how to lift some stone."

But then, there is this –


This whole crane thing starts with a Greek gentleman by the name of ARCHIMEDES. He spent a great deal of time investigating “mechanical advantage” and is usually remembered for popularizing the use of the lever. Arguably the most famous quote attributed to him is:

"Give me a place to stand on, and I will move the earth."


Check it out here: http://www.math.nyu.edu/~crorres/Archimedes/Lever/LeverIntro.html


While churning out a whole stable of inventions based on geometry, area, weight and volume, he had time to come up with the block and tackle which, together with his knowledge and experience with the lever led him to create a crane of sorts which has been known through the ages as Archimedes Claw – a crane like device with a boom, tackle, winch and hook which was to be used to protect the Greek city of Syracuse from attack by the sea. 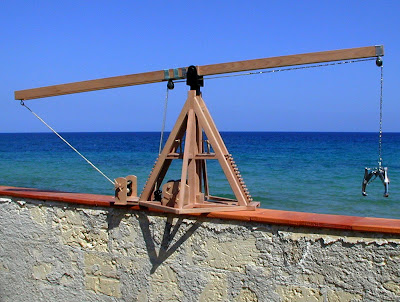 If an enemy ship approached the sea wall, the boom was swung over the wall, the iron hook lowered (winched down) to the ships hull (preferably below the waterline) the operator was given the signal to “boom-up” and the bad guys on the ship (along with their weapons and equipment) were abruptly moved opposite the lift point of the ship.


Build your own model from a kit here:  http://www.redstoneprojects.com/trebuchetstore/archimedesclaw.html


While the Greeks brought the mobile crane into general use, it was the Romans (as you would expect) who perfected the device adding capacity and mobility and assigning engineers specifically for crane development and crane operation in the field.   Using multiple cranes, they were able to lift stone weighing 60 tons.  Multiple crane lifts and coordination are difficult today even with our modern communication systems.

FOR FURTHER READING AND RESEARCH ON ANCIENT CRANES:

More on the tomb of a Roman contractor:
http://members.bib-arch.org/publication.asp?PubID=BSAO&Volume=8&Issue=4&ArticleID=12

For a short look at ancient cranes: http://www.worldwideflood.com/ark/technology/cranes_and_lifting.htm

For the best primer on the subject of crane history, look no further than “Low Tech” magazine:


More about cranes through the middle ages here: http://130.15.85.212/proceedings/proceedings_WorldCongress/WorldCongress07/articles/sessions/papers/A121.pdf

Posted by Runnion Equipment Company at 3:03 PM No comments: